Equitant returns 3 years later since the last release Dynamism (not counting any remixes inbetween 2009 and 2012) with a new one: Body Vehement.

Not only is Equitant the only (to my knowledge) old school EBM/anhalt EBM directed artist from the good old West, the music stands out on its own across all of the industrial and electro body music scene. Monotonic, as always very hard-beating, minimalist and yet often with floating and atmospheric soundscapes on top (which may make one think of newest Signal Aout 42 albums), Equitant stays as unique and great as always has been. 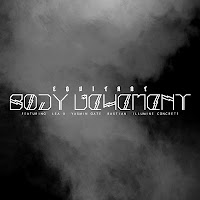 Equitant's Body Vehement shows off his expertise: taking electronic music to it's raw basics, adding a personal touch of hard beats and bass, creating unique melodies and synth tracks with a strong punch, and then either letting them stay monotonic and hard, or adding a layer of atmosphere that not only makes you want to stomp around and dance, but also may let you dream away. This is what Equitant does best and what makes him stand out in industrial/techno/EBM/Oldschool-EBM scene.

Now someone, please, arrange for Equitant to finally come and play in Europe!

Familientreffen 8 was the ultimate highlight of EBM this year. Featuring the old school EBM legends Pouppée Fabrikk as headliner, that alone was reason enough to go. But the whole line-up was particularly strong and more old school than previous few years. Here is a quick sum-up of the festival, and scroll below for videos and pictures!

Festival opened in the DJ tent on Thursday. Human Steel unfortunately never made it to open the event, due to car problems, as the rumour had it. Instead Schramm delivered a strong and professional opening. That was also the only day with lots of rain, the rest of the weekend had perfect weather for dancing and stomping around while drinking beer. A little bit disappointing though: nobody was doing push-ups anywhere!

Friday started with French Karbu 38: a very worthy opener for this day. Only wish is that they could have played longer than 20 minutes. Following AD:Key and Restricted Area with neo-old school EBM, the latter was a hard-hitting surprise, not much unlike Spetsnaz - which also was present that night in the form of Volvo 242. Lots of Ebb and 242 hits were played, upping the intensity and the joy of old school. The three other bands represented true old school EBM classics: The Invincible Spirit, Brigade Werther, and Psyche (awesome dance moves!!).

Saturday was the big day. Opener The Juggernauts was particularly great with their unique old school attitude and helmets that might have fooled some people into thinking that Jäger 90 had turned up under a different name. That the festival area was filled this early during the day is enough to prove that The Juggernauts is something special. Look for the video below.. Muscles on The Move followed with strong and hard-hitting anhalt EBM (and would have been a perfect band to do pushups to!!). Nuekampf vs Amnsitia was a double band performance, thus also quite longer, then followed by Darkmen with straight forward anhalt EBM. After this, Spark! as always drew an enormous crowd and tried to teach everyone Swedish with their mix of anhalt EBM and more melody. Gaytron was next with professional performance and a surprisingly powerful cover of Klinik in the end! Obligatory Rummelsnuff was next with as always fun stage-show and a particularly good additional singer.

..Then things grew quiet. The lamp-post on the left side kept going black and blinking dimly a few times. There was wind, and a storm was brewing. A synth appeared on a tower of red beer boxes on stage. The storm broke loose with one of the most powerful voices in EBM and the most raw and old school EBM sounds. Pouppée Fabrikk was there and they immediately filled the whole festival area, there never was enough room in front. Advising people to be kind to each-other in the moshpit and greeting the family of EBM'ers, all hell broke loose when Pouppée Fabrikk started their show. The concert was set-up chronologically, following all the albums from start to finnish with several songs from each. This is particularly unique, because more modern live-mix of these has a different sound than 20-25 year old album releases. Pouppée Fabrikk is a truly professional live-band, making an effort to include the whole public and kindly giving away their boots twice (the crowd misunderstood the first time they came off stage, and returned them). Pouppée Fabrikk was the most powerful, fun and awesome live experience that Eine Tasse Jäger has seen.

Here is a collection of videos from this year (come back a few days later, this will be updated with new ones if they appear on youtube).

And for a collection of pictures, go to aussagen[b]logik.
Posted by Fishermang at 16:06 1 comment:

It's time for the family meeting again. Have you done all the neccessary work-out for Pouppée Fabrikk moshpit? If so, remember to warm up. We suggest a healthy dose of beer and Jäger while doing push-ups. 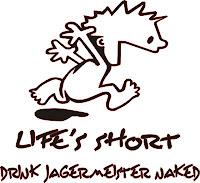 For those who are taking the train to Sandersleben, here is an extra challenge. Only tools required for it is beer. Everytime the train passes an abandoned industrial building, you drink beer. You can consider it as a warm-up too. Apparently the weather is going to be very warm, and everybody knows it's important to drink liquids, so here you go. 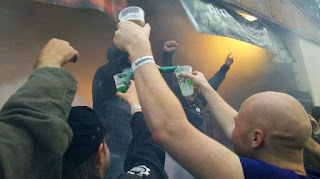 Enjoy the world's most awesome festival and see you there! Come back here for videos of hard beats, bad-ass moshpits, and fat bass-lines next week. SKÅL! (cheers!)
Posted by Fishermang at 14:20 No comments: