New albums from Escalator and Karbu38

Incoming new production message from Elektro Kommando! E | K Product is the title of the new Italian label, which is also a part of Elektro Kommando, creating live anhalt EBM events (which they have been doing for soon 3 years) and a webshop. They have now signed two new bands and both will release new albums in January 2011: Escalator and Karbu38. View all English information here: http://ekproduct.com/

Escalator is an old legendary Hungarian band, always following in true old school EBM footsteps, and sharing some similarities with Front 242, especially in their old releases. However, Escalator has taken its own personal and independent path within hard beating electronics genre. The new album is called "Out of my Ego".

Karbu38 is a French anhalt EBM newcommer to the scene. Only one song "Ready Steady Go" from this band exists so far (and you can find it as a demo on downloads on the right side here), and it has received many good responses. As a result, Karbu38 will release their debut album in January on Elektro Kommando. The title is "Tour De Chauffe" and will have 12 new tracks, with 4 additional remixes from the elite of anhalt EBM.. - Spark!, Autodafeh, Darkmen and Tech Nomader. Are you ready!? To be STEADY!? 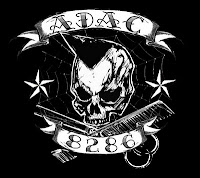 
Also watch out for some fresh news about Altmark Electros (Projekt A:E), as soon as 1TJ gets the good-to-go-sign-with-some-links.
Posted by Fishermang at 19:30 1 comment: