What is Stechschritt? Stechschritt is one of the more recent anhalt EBM bands/projects, and one that everyone who has a taste for something different and with a touch of its own originality, should pay some attention to! March(!) in here, and give it a listen through the links below!

The second album from one-man-band, ran and maintained by Peter,  is called Die Neue Jugend and was released for the masses in March by Electric Tremor. 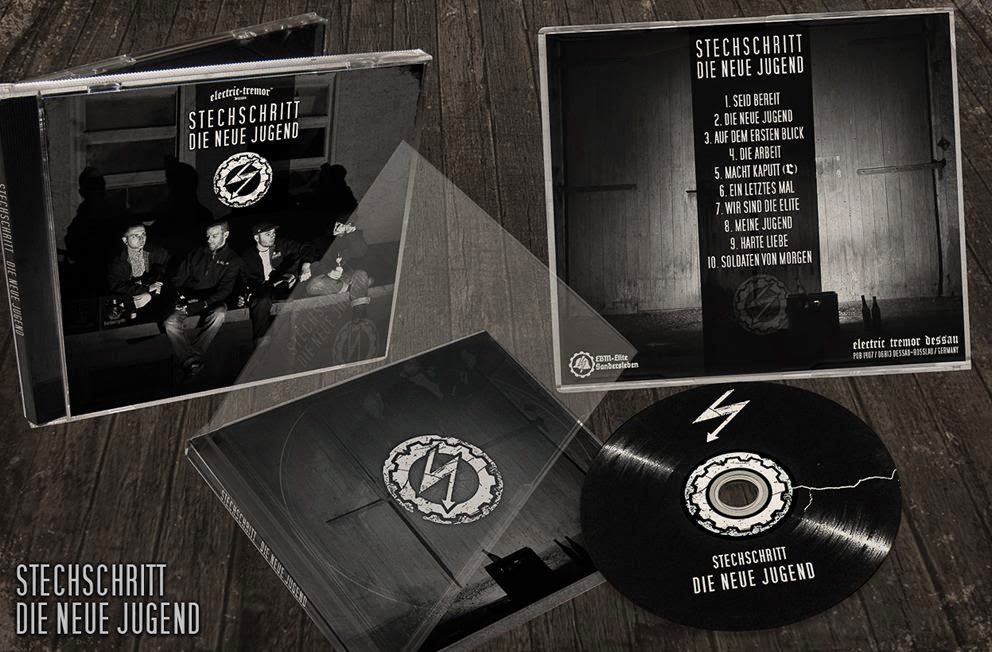 It is not what one would call typical anhalt ebm, but at the same time seems to be as anhalt as ebm can get. The sound is straight forward, aggressive and loud. The music is raw and reminds of early Pouppée Fabrikk releases, particularly because of the vocals, which could as well work in a old school death metal band. The voice on the album is strong, growly, and with a personal identity, which is another quality mark of Stechschritt. Also, the Pouppée Fabrikk association gets even stronger once one learns that the album was mastered by Henrik Nordvargr Björkk himself.

Stechschritt uses sounds never heard in EBM before, which is exactly why it becomes original. By this, I mean, in addition to standard EBM bass and synth lines as well as drumming. There is another layer of music here, which will surprise you when you least expect it. It may be a tinier sound hidden somewhere in the background among percussion, or a straight forward industrial synth that defines the melody of a track. Simply put: Die Neue Jugend is refreshing to listen to. It is not just very good quality anhalt EBM, it is very good quality NEW anhalt EBM.

Stechschritt also got help from Christoph from A.D.A.C. 8286 on this album for drumming, and also some contribution on vocals on a certain track. Maybe for this reason, Die Neue Jugend may remind of A.D.A.C. 8286 in its raw sound of bad-assery, and should also appeal to all fans of this band. There is additionally a contribution from Rummelsnuff on vocals on one of the tracks.

In addition to some old school german punk covers (Schleim-Keim and Ton Steine Scherben), there is also a tribute cover to ELITE!'s "Harte Liebe" track. Here it is interesting to note that Stechschritt is more or less the only EBM band that has tried and succeeded in making covers of old energy-filled punk tracks, and which have worked out insanely well.

Stechschritt may seem very militaristic at a first glance, not the least because of the band name. However, despite various shouts like "marschieren!!!" in some of the tracks, the lyric themes are what identifies the standard of anhalt EBM where militarism meets dancing, drinking, love (hard or not), and even a general sense of some irony.

The CD comes packed in a standard jewel case, but the layout and graphic content here is superb. The CD looks like an LP, and it is clear that Peter has some serious skill in graphic presentation here.

Last year Pouppée Fabrikk asked for EBM that doesn't sound like a copy of everything else with generic programming and vocals that might as well be recorded while sitting on a toilet after having way too much Jäger and white loaf bread with some gone bad sausage the day before. Well, Pouppée Fabrikk, Die Neue Jugend is what you asked for, but I guess you already know since you mastered the CD!

Here is to hoping that Stechschritt will continue making more music in this fashion and style, as it indeed is a fresh breath of old school EBM!

Here is a taste for your ears from youtube: https://www.youtube.com/watch?v=Vel__vhLmRQ

And the album can be purchased from Electric Tremor Working Class Store: http://shop.electric-tremor.de/new/stechschritt-die-neue-jugend.html
Posted by Fishermang at 21:57 No comments: